The device presented here is a low cost workshop mechanical watch adjuster. It is also called Chronocomparator. It allows to check the accuracy of a watch (more or less a certain number of seconds per day) and to adjust it to minimize this drift.

I will not detail the operation of a mechanical watch. There are many explanations on the net. Let's just say that the adjustment can be done using one or two devices (it depends on the watches) which act on the spiral spring of the balance and allow:

The picture comes from http://www.montrespourtous.org/

How a watch adjuster works?

To make explanations easier, we will consider that a watch is "ticking" (the little sound you hear that is produced by the escapement of the watch). This notion of "tick" and "tock" is arbitrary, a "tick" can be a "tock" and vice versa. But once you have decided that a noise is a "tick", the next is a "tock".

A watch adjuster detects the "tick" and "tock" of the watch, measures the period between two "ticks" (or "tock") and compares this period with that expected according to the design of the watch.

A display shows the difference between the measured value and the expected value. If the measured value is lower than the expected value, the watch will advance, if it is longer, it will delay. The goal is to make this difference tend towards zero by acting on the regular corrector which controls the advance (marked A(vance) or F(ast)) and the delay (marked R(etard) or S(low)).

It also makes it possible to measure the regularity of the movement, in other words, the difference in duration between a "tick" and a "tock". Again, the goal is to make this difference tends to 0 by acting on the stud support (when present, otherwise it is more complicated) that allows the adjustment of the alignment of the pendulum with the pallet fork and the escape wheel.

Notion of beats, period and frequency

The expected duration or frequency values depend on the caliber of the watch. The table below gives some common values:

Some features of the watch adjuster

This watch adjuster aims to:

If you are someone ordered and you have room, then you can use a laptop and in this case, I recommend the Watch-o-scope. Note however that the device that I propose here can also be connected to a microcomputer. So you have two devices for the price of one.

The main features are:

General operation of a watch adjuster

A watch adjuster consists of:

The sensor generally used is electric piezo type (piezo thereafter) that uses the properties of certain materials to generate an electrical voltage when they undergo a mechanical stress such as, for example, a shock.

You can also recover such a sensor on an old quartz watch with alarm since the body that produces the sound of the alarm is also a piezo sensor.

An electret microphone can also be used. For my part, I tested this model that works satisfactorily. It has its own preamplifier, all sold at around € 1.5.

If you use this solution, you will not have to build an amplifier since it is integrated. By cons, it is less powerful than the piezo sensor and above all, it is very sensitive to ambient noise (it's normal, it's done for that). A door that closes, a car that passes, etc. and all measurements are disturbed.

If you use the piezo sensor, you will need to build an amplifier to bring the signal value to a level that can be used by the microcontroller.

Here, no hesitation, use the Watch-o-Scope schematic. It is very suitable and inexpensive.

However, it has the disadvantage of requiring a voltage of 9V while the watch adjuster is powered via the USB socket of its microcontroller and therefore has only 5V.

I also added a signal shaping circuit so that it is easier to use by the microcontroller. To do this, I used the 555 monostable stainless (designed in 1970! Probably the most famous analog circuit and the best known in the world of electronics) that can be found everywhere for a handful of cherry tails.

This monostable generates a rectangular signal from the analog signal.

To trigger the 555, it is necessary to invert the input signal. A transistor (here, a BC109 because I had full but you can also use a BC548 or any bipolar NPN general transistor for small signals) is used for this purpose.

The microcontroller is an Arduino Pro Micro ATmega32U4 5V 16MHz (around 3,5€). You can download the software on the present page.

There are resistors, capacitors, potentiometers, LED, jack, contactor, etc. and a test pad for soldering the components. If you are an electronics technician, you probably have all that in stock. Otherwise, you will need to order them. You should not get by for more than 10 to 15 €.

A word on the contactor anyway: it is a rotary model with momentary pusher that we find for about 2€ 5.

Then you have to put all this in a box and tinker a watch vice to put the sensor. Again, the Watch-o-Scope web site can give you ideas. For my part, I took a vice all done (about 2 €).

The amplifier schematic is on http://www.watchoscope.com/. Don't forget to replace TL074 by LM324 and power everything in 5V. 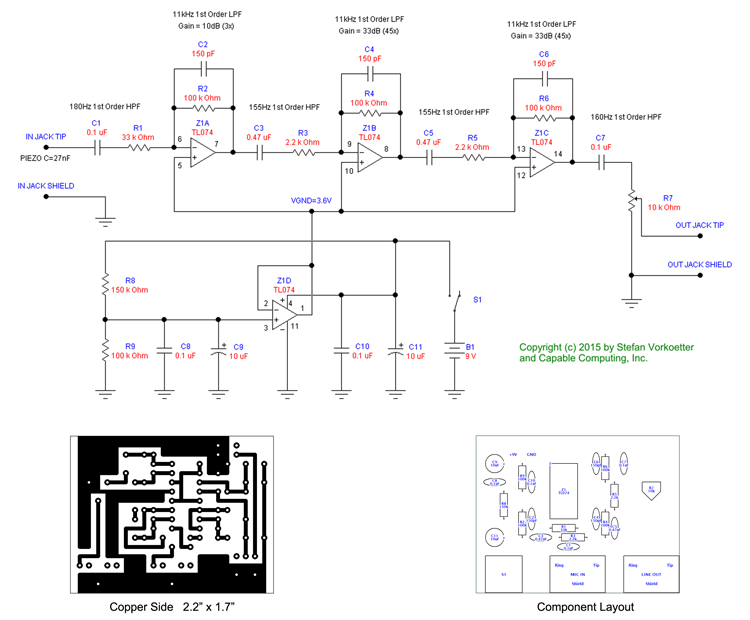 Comments on the schematic

P1 is R7 of the Watch-O-Scope schema.

MAX9814 and SW2 are optional. I wanted to have on the device a built-in microphone sensor with its own amplifier (the MAX9814). The results are correct if the watch is noisy enough.

If you do not use the built-in microphone option, delete the MAX9814 and SW2 and connect the output of the piezo amplifier directly to the potentiometer.

The multi-turn potentiometer R8 is used to set the duration of the pulse generated by the 555 as a function of the associated capacitor.

During this "blanking" time, no signal is taken into account by the microcontroller.

50ms is the duration that I choose. It makes it possible to avoid counting possible parasitic shocks as being "tick" or "tock". It is compatible with periods up to 36000 beats per hour. On the other hand, if you have a watch whose beat count per hour is greater than or equal to 72000, then you will not measure anything.

The choice of this pulse duration belongs to you. If you want a fixed duration of 50ms, you can replace the multi-turn potentiometer with an R7 resistor of about 47kohms.

You can also decide that this duration is too big. You will then reduce the resistance, with the risk that some parasitic shocks that follow the impulse that you want to measure disturb the measurement.

You can also decide that this "blanking" time of the measurement should depend on the number of beats per hour of the watch. In this case, you will be able to modify the program of the device so that this adaptation is automatic and you will regulate the duration of the signal on the 555 at around 5mS.

For my part, I put a potentiometer for the case where I will one day fall on a special watch requiring a modification of this duration. But I did not find it useful to put this potentiometer on the front pannel. It is nevertheless an option that you can consider. That will make a setting of more...

The following trace comes from a capture of the amplified signal (in blue) and the resulting signal after passing through the D flip-flop.

D3 and D4 are not present on the Watch-O-Scope schematic. I did not put them either. However, a piezo sensor can generate a fairly high voltage that could destroy the operational amplifier. D3 and D4 allow the input voltage to be limited to approx. +/- 0.6V.

The wiring of the Jack input jack is usual. The body at (-) of the sensor and connected to the ground of the assembly, the (+) on the first ring and the tip (for a stereo jack) or only the tip (for a mono jack).

I wanted to make a device very easy to use, with very few commands. This means that a lot of settings available on other devices are not present. Is it a problem ? In practice, no and for the following reasons:

The instructions for use are as follows:

Menu for the beat selection

The available values ​​are programmed. There is no automatic search for the number of beats. It is not that this function is difficult to achieve but in practice, it is not very reliable, especially if your watch is very out of order.

Once the number of beats per hour is selected, press the same switch to trigger the measurement.

More generally, pressing the contactor triggers the measurement if it is not in operation or pauses it (a press) or stops it (two presses) if it is on.

The other button is used to adjust the volume. In practice, you should not have to touch it after the first adjustment, unless you change the sensor.

The volume is correctly adjusted when the two LEDs are alternately beating regularly.

If the LEDs do not flash alternately, it means that the volume is not high enough. If one or both LEDs are still lit, the volume is too high.

If the LEDs blink erratically, it is likely that the volume is too much or not high enough, or that your watch has a very big problem that goes beyond a simple adjustment.

When the measurement is triggered, the display shows:

When there are no significant values ​​to display (no measurements made), the displayed values ​​are represented by hyphens "---".

The display units are automatically selected by the program. They are expressed in μS, ms, s or mn. "***" means an overflow.

Generally, one starts by adjusting the difference of the periods until it is as close as possible to zero. This adjustment should be done for several positions of the watch (horizontal, vertical ...).

When the result seems satisfactory, we re-trigger a measurement campaign focused on the advance or the delay per hour.

Accuracy and resolution of the device

The microcontroller clock determines the accuracy of the device. This clock has a frequency of 16MHz. It is usually accurate to less than 1%.

The program measures time with a resolution of 4μs. The accuracy of this resolution depends directly on that of the clock.

Take the case of a watch whose beat is 18000 rounds per hour. The duration of a beat is therefore 400ms and the duration between a "tick" and a "tock" is 200ms.

Nevertheless, human being what it is, one wishes to have an indication of the advance / delay per day as soon as possible, even after 10s of measurement.

The device therefore displays as soon as it can (approximately after twenty measurements) an approximation of this advance / delay.

The image below represents the prototype I used for software development. Compared to the final version, we note the presence of a DC-DC voltage booster to produce 9V from 5V. In this version, I was using the TL074 from the original Watch-O-Scope setup.